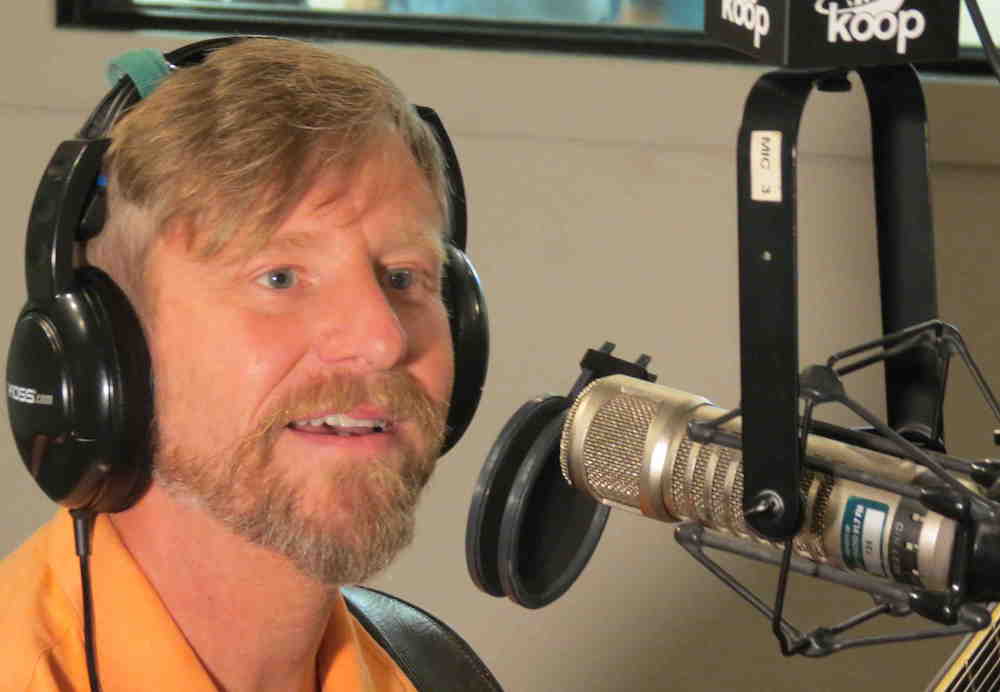 Guy, who has been a big part of the Austin music scene for 25 years and has won numerous Austin Music Awards, including "best male vocalist," was previously our guest on Rag Radio in a memorable show on November 16, 2012. He performs several songs and joins us in discussion of his music, his life, and the crazy world we're living in.

The master of an array of instruments, including acoustic, electric, and slide guitar, harmonica, ukulele, and singing saw, Guy has been noted for his "gripping, powerful vocals that deliver energetic yarns about love, the government and the apocalypse." Forsyth, who founded the raucous, irreverent, and highly theatrical Asylum Street Spankers in Austin in 1994, started out as a comic stuntman at renaissance festivals and as a street busker in New Orleans. He regularly tours in the United States and Europe, and has opened for and shared the stage with musicians such as BB King, Ray Charles, Lucinda Williams, Jimmy Vaughn, Dr. John, and Robert Cray.
Photo of Guy Forsyth by Roger Baker at the KOOP studios in Austin, September 29, 2017.Rag Radio is produced in the studios of KOOP 91.7-FM, an all-volunteer, cooperatively-run, solar-powered community radio station in Austin, Texas, in association with The Rag Blog and the New Journalism Project, a Texas 501(c)(3) nonprofit. The host and producer of Rag Radio, Thorne Dreyer, is a prominent Austin-based activist and writer who was a pioneer of the ’60s underground press movement. The show’s engineer and co-producer is Tracey Schulz and the staff photographer is Roger Baker. The syndicated show is broadcast (and streamed) live Fridays, 2-3 p.m. (Central) on KOOP, and is later rebroadcast and streamed on WFTE-FM in Mt. Cobb and Scranton, PA., on Houston Pacifica's KPFT HD-3 90.1, and by KKRN, 88.5-FM in Round Mountain, CA -- and as a featured podcast at Veterans Today.